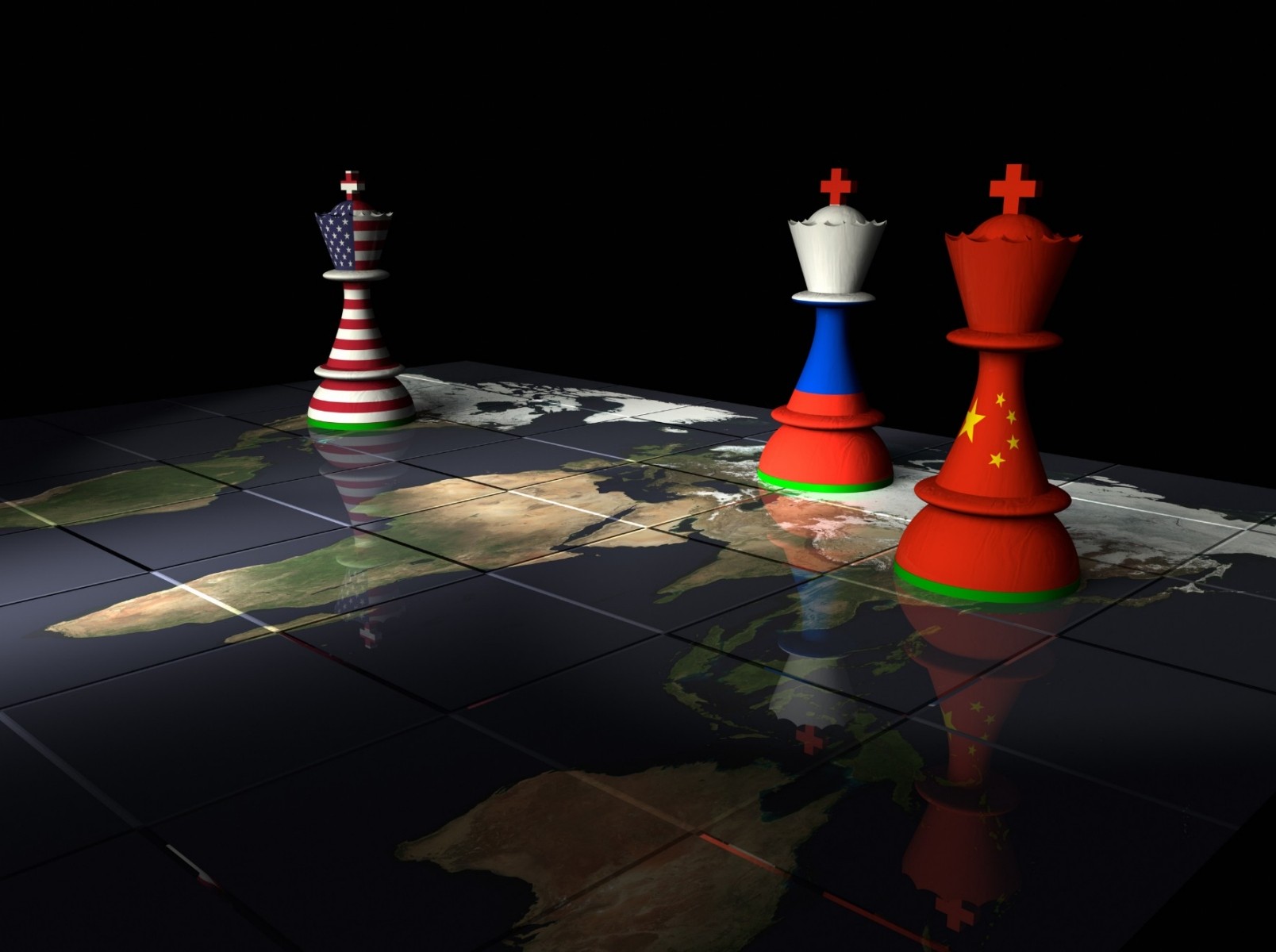 In one of my previous analysis paper, “Murky American Politics Posing Global Foreign Policy Challenges”, an attempt was made to sketch out the constraints imposed on smaller countries in the American orbit and even outside it. In this article, I shall focus on the imperatives of fine-tuning Pakistan’s National Policies in the face of contemporary Great Powers’ Geopolitical Contest. It is a given that in the aftermath of the Cold War, the entire world had become a de-facto American sphere of influence. The strong still imposed their will on the weak; the rest of the world was obligated to play largely by American rules, or else face a precipitous price, from crippling sanctions to outright regime change under the overwhelming fact of U.S. hegemony. Now, however, that hegemony is fading, and Washington has realised what it calls “a new era of great-power competition,” with China and Russia increasingly using their power to assert interests and values that often conflict with those of the United States. Unipolarity is over, and with it the fantasy that other nations would simply take their assigned place in a U.S led international order. Therefore, American role on the global scene is likely to be not only different; it may also be significantly diminished.

When on February 4, 1945, President Franklin Roosevelt met with Soviet leader Joseph Stalin and British Prime Minister Winston Churchill at Yalta, U.S. policymakers were similarly resistant to accepting a world in which spheres of influence remained a central feature of geopolitics. For the four decades that followed, the United States and the Soviet Union engaged in the great-power competition that we know as the Cold War. The well known Cold War history should serve as a reminder: a nation that is simultaneously idealistic and realistic will always struggle to reconcile rationales and rationalizations of purpose, on the one hand, with realities of power, on the other, with affected countries undertaking transformation or more specifically facing the reality of accommodation.

After nearly half a century of competition, when the Cold War ended and the Soviet Union disappeared, in 1991, the United States was left economically, militarily, and geopolitically dominant. In the first two decades of the post–Cold War era, U.S. defense spending exceeded the defense budgets of the next ten nations combined (five of them U.S. treaty allies). The United States and its allies could welcome new members into NATO, applying to them its Article 5 security guarantee, without thinking about the risks, since the alliance faced no real threat. In that world, strategy in essence consisted of overwhelming challenges with resources. But that was then. The tectonic shift in the balance of power that occurred in the first two decades of the twenty-first century was as dramatic as any shift the United States has witnessed over an equivalent period in its 244 years. Consider, for example, the U.S. response to China’s Belt and Road Initiative. With currency reserves of almost $3 trillion, China could conveniently invest $1.3 trillion in infrastructure linking most of Eurasia to a China-centered order. When Secretary of State Mike Pompeo announced that the United States would increase its own investments in the Indo-Pacific in response, he was able to come up with just $113 million in new investments. China has, of course, been the chief beneficiary of this transformation. In the past generation, its GDP has soared: from 20 percent of the U.S. level in 1991 to 120 percent today. Although China faces many internal challenges, there are more reasons to expect this basic economic trend to continue than to bet that it will stop soon. With four times as many citizens as the United States, China is expected to see its GDP rise to double that of the United States.

In Asia, the economic balance of power has tilted especially dramatically in China’s favor. As the world’s largest exporter and second-largest importer, China is the top trading partner of every other major East Asian country, including U.S. allies. Globally, China is also rapidly becoming a peer competitor of the United States in advanced technologies. Today, of the 20 largest information technology companies, nine are Chinese. China’s military spending and capabilities have surged, as well. A quarter century ago, its defense budget was one-25th that of the United States; now, it is one-third and on a path to parity. And whereas the U.S. defense budget is spread across global commitments, many of them in Europe and the Middle East, China’s budget is focused on East Asia. Accordingly, in specific military scenarios involving a conflict over Taiwan or in the South China Sea, China may have already taken the lead.

Russia is a different matter. When the Soviet Union dissolved, the resulting Russian state was left with less than half the GDP and half the population and saw its borders rolled back to the days before Catherine the Great. Yet Russia remains a nuclear superpower with an arsenal that is functionally equivalent to that of the United States; it has a defense industry that produces weapons the world is eager to buy; and it boasts military forces that can fight and win—as they have demonstrated repeatedly in Chechnya, Georgia, Ukraine, and Syria. On a continent where most of the other nations imagine that war has become obsolete, and maintain military forces more for ceremonial than combat operations, military prowess may now be Russia’s major comparative advantage.

Since quite a few U.S analysts and policymakers still cling to images of China and Russia formed during the bygone era, their views about what the United States should and should not do continues to reflect a world that has vanished.

Recent events in Syria offer a preview of what’s to come; and the USA will come to accept such outcomes as good enough—at least for the foreseeable future. Like Assad’s projected atrocities, Russia’s absorption of Crimea and China’s militarization of the South China Sea are now facts on the ground that no one will contest militarily. The United States’ twenty-first-century wars in the Middle East and Afghanistan offer vivid examples of both outstretching and mismatch between ends and means. Therefore, for present and future, U.S. policymakers will have to abandon unattainable aspirations for the worlds they dreamed of and accept the fact that spheres of influence will remain a central feature of geopolitics. Nevertheless, in the military arena, Washington will still need partners that bring more in assets than they introduce in risks. Unfortunately, few of the United States’ current allies meet this standard. The U.S. led Quad group comprising USA, Japan, Australia and India is one such attempt to make a significant regional alliance in Indo-Pacific with other smaller partners joining the orbit. But the fact remains that alliances are not forever. Historically, when conditions have changed, particularly when a focal enemy has disappeared or balances of power have shifted dramatically, so, too, have other relationships among nations. Most Americans today have forgotten an era in which NATO had a counterpart in Asia, SEATO (the Southeast Asia Treaty Organization), and even an analogue in the Middle East, CENTO (the Central Treaty Organization); both of those are now artifacts in the museum of retired national interests. Given the realities of nuclear weapons in this new world, not only is nuclear war an unthinkable option; even a conventional war that could escalate to nuclear war risks catastrophe. Competition must thus be tempered by caution, constraints, and careful calculations in risk taking. For a nation that has accumulated a long list of entanglements with nations that may have, or may imagine they have, a blank check from Washington, this creates a big problem. The line between reassuring an ally like India and emboldening its leadership like Modi to act recklessly is a fine one that POTUS Trump must ensure to avoid potential global catastrophe.

USA declaring India as its greatest strategic partner in the Indo-Pacific region to contest and contain China while simultaneously subjecting Pakistan to maximum political, diplomatic, economic and military pressure besides allowing India to squeeze Pakistan form East and West, has greatly pushed Pakistan into Chinese sphere of influence. Despite Pakistan’s great sacrifices, the enduring great powers geopolitical rivalry has kept Pakistan on the anvil, mainly due to failure of the policy makers to appropriately comprehend and cater for the contemporary dynamics of global realpolitik. It is so ironic that regardless of more than due delivery on Afghan peace process, Pakistan remains under tight scrutiny by FATF and fed on economic drip by the IMF. Despite meaningless lip service by POTUS Trump especially with regards to offer of a middle man role for dialogue between Pakistan and India on core disputes including occupied Kashmir, Pakistan policy and decision makers will be well advised to shed away wishful thinking and comprehend the evolving global dynamics and fine tune our national policies accordingly. While America is struggling with keeping dominant capitalist economic system in the lead and perk up its economic and military alliances, like TPP, NAFTA, Indo-Pacific Rebalancing Policy and NATO; Pakistan must also work hand in glove with new strategic partners like China and other member countries of BRI with focus on involving all South Asian and Central Asian countries in the CPEC/BRI rather than trying in vain the same old experiments and expecting different results. China, Pakistan, Russia, Iran, Turkey, Afghanistan, Central Asian Republics, Malaysia and many Arab countries are prone to make significant economic and military alliances that are a strategic imperative for all of them. Self respecting well diversified and multi-polar foreign and economic policies are bound to serve Pakistan’s national and security interests more effectively than had been the case in the last seven decades. Hope claimants of change will pay some heed to these thoughts!